The Not So Cool Girl

I’d like to share some current events. But first, I need to express- or maybe the better word is confess- to something that’s been nagging at me.

I am a recovering “Cool Girl.”

The “cool girl” is similar to the “nice guy” in that it involves putting on airs to impress someone, then getting angry when it backfires and you don’t end up with your desired result.

A really fabulous summary of the “Cool Girl” can be found in Gillian Flynn’s Gone Girl, (which despite being terrifically, expertly written and quite suspenseful has been dismissed as a “fun beach read” due to it’s overwhelmingly female audience but that is an “UGH” for another day).

I just got around to reading Gone Girl and was floored by her passage on the cool girl. Turns out it’s kind of viral and I’m a little late to the party, but here it is in case you haven’t read it: 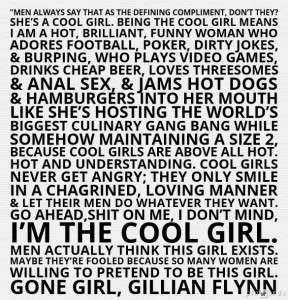 I don’t think cool girls come out of nowhere. I think most of us have this kind of laid back, funny vibe and we probably enjoy a couple of hobbies outside of what’s considered normal for a female.

For me, it was the fact that I have this overwhelming need to feel special. So when cute guys started telling me I was “not like other girls” I became kind of fascinated with the idea. I started to explore and enhance the qualities that garnered that reaction.

I didn’t really add anything that wasn’t there. I mean, I do genuinely enjoy burping and watching Pauly Shore movies. But I started teasing out those parts of myself and arranging them on a silver platter for prospective romantic partners.

And then it sort of made me into an asshole and a doormat at the same time, a fun dichotomy that plagues both the “nice guy” and the “cool girl”.

I was an asshole because I accepted the “you’re not like other girls” thing as a compliment, when really it’s a pretty fucking stupid thing to say to somebody.

I was an asshole because I stopped standing up for women as much. I wore “not easily offended” as a badge of honor.

I was a doormat because I was not honest with the men I was dating about 70% of the time. I didn’t share my feelings because it would make me one of those “other girls.”

I was a doormat because even when I did stand up for myself, I would find myself apologizing in a panicked attempt to crawl back into my Cool Girl shell.

How does this relate to comedy?

So many ways. For many years (up until pretty recently) I was like a walking, talking version of Cards Against Humanity. I was “ironically offensive” because it got a rise out of people, and as long as what I said was clever, I could get away with it.

And I was oblivious. I remember at one point saying that the “he’s a player/she’s a whore” dynamic didn’t exist because “my friends totally call both men AND women sluts!” OH, 18 year old me, so you’re equally judgmental of everybody’s private sexual choices? You’re totes progressive. Barf.

I allowed myself to believe that I didn’t need feminism because I just like, you know, never encountered sexist attitudes. 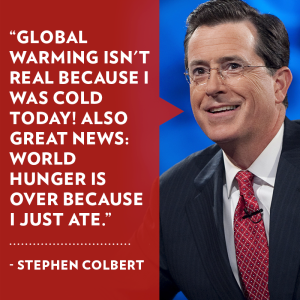 I thought I’d left that girl behind. I really did. But she still sneaks in now and again.

Because I just wanted to move on from the whole “women in comedy” issue. Because I had the audacity to be bored with it.

Because my positive experiences outweighed my negative ones. By a landslide. Seriously, I am from an extremely supportive city.

I thought it was almost easier to be a female comic. In some ways it can give you an in. On a show that wants to diversify their line up, or for specific events that are looking for a female perspective.

And I was so used to being the cool girl that I really didn’t think about women in comedy from anything other than my extremely privileged perspective.

And I was so used to being a cool girl that I let the sexism I did encounter roll off my back.

And I was so used to being a cool girl that I stopped listening to the “others”.

And that was a problem.

After awakening to the feminist ideals that had been laying about in my brain for some time, I started trying to use my stage time to be an ally.

I haven’t always been great at it, but I’ve really been trying to find out what might make a person feel uncomfortable at a comedy show, and I’ve wanted to- in some small way, help stop that from happening.

And here’s the thing about Jen Grant.

She was not heckled. She was sexually harassed.

Calling sexual harassment heckling is like calling sexual assault sex. They involve some of the same elements, but they are different.

We need to react to this the way we would react to sexual harassment. When someone sexually harasses a person, they seek to take their power away. It is not a “compliment” or a “joke”, it is a direct attempt to knock someone down.

And maybe this is a pretty long intro (which is why this is a blog entry and not a status update) but this is why it is so important to listen to women’s opinions and value them- even if you can’t directly relate to them.

I think if you were going to start anywhere, this article by Jess Beaulieu would be a great place.

And for the record- she’s the fucking coolest.